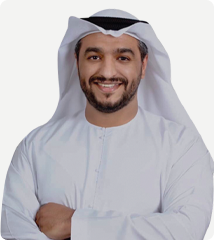 Captain Ammar Mubarak Al Shaiba is the Acting CEO of the Maritime Cluster and SAFEEN Group, part of AD Ports Group. In his role, he leads the development of marine services, shipping operations and assets, including eleven (11) operational units comprising more than 135 vessels and marine units.

Joining the organisation back in 2013 in Harbour Master Division, Capt. Al Shaiba was promoted to Khalifa Port Harbour Master at AD Ports Group’s flagship deepwater port as well as at Zayed Port, in addition to carrying out development and executive projects for Marine and Port operations in Khalifa Port, as part of the Group’s strategic expansion plan.

From 2017 to 2019, he held the position of Chief Harbour Master to oversee the development and implementation of regulations governing the safe navigation of vessels and managing fleet traffic within port waters and enforcing local, federal, and international best practices within commercial ports.

During his tenure with AD Ports Group, Capt. Al Shaiba has served as the CEO of Ports Operating Company and Managing Director of Zayed Port, the Free Port, as well as Musaffah Port, where he managed port optimisations and automation within operations while extending strategic growth within the Group’s operations. He also oversaw SAFEEN Feeders, a subsidiary of AD Ports Group that serves mainliner shipping clients and supports trade through increased connectivity and optimised shipping costs within and beyond the region.

He holds a Professional Master of Business Administration (PMBA) and an Advanced Diploma in Nautical Science from the University of Tasmania in Australia. Capt. Al Shaiba also holds a Chief Mate/Master Certificate from the Australian Maritime College (AMC) issued by the Australian Maritime Safety Authority (AMSA). He is a member of the International Harbour Masters Association (IHMA), the International Association of Ports & Harbours (IAPH) and several other respected committees within the Maritime industry. 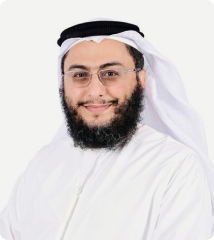 Serving as Managing Director of Abu Dhabi Maritime Academy, part of AD Ports Group, Dr Yasser Wahedi manages day-to-day operations at the Academy. He is responsible for developing and monitoring procedures and policies to ensure regulatory compliance, and is also charged with devising and implementing the Academy’s overall long-term strategic plans.

Prior to joining AD Ports Group, Dr Al Wahedi garnered more than 16 years’ experience in the field of industrial research and academia.

His research includes authoring and co-authoring more than 40 journal publications including one featured in the prestigious Science.

He has served in several research committees, and held the role of Chief Technology Officer at the Gas Research Center, where he became well versed in establishing research administrative procedures and policies, managing project portfolios valued at USD 32 million, and directly managing research projects worth USD 3.2 million.

A committed and noteworthy inventor, Dr Al Wahedi is a patent holder of two granted patent and three filed patents.

Dr Al Wahedi received his PhD in Chemical Engineering from the University of Minnesota Twin Cities in the United State ranked third over USA in 2015.

By clicking Accept, I understand that I may be contacted by AD Ports Group and Affiliates in relation to this event and other similar events and services relevant to my industry. By registering for this event, I acknowledge that AD Ports Group and Affiliates may contact me as described herein and as otherwise set out in the Privacy Policy and in accordance with stated Terms and Conditions.
ACCEPTDECLINE
Privacy & Cookies Policy

This website uses cookies to improve your experience while you navigate through the website. Out of these cookies, the cookies that are categorized as necessary are stored on your browser as they are essential for the working of basic functionalities of the website. We also use third-party cookies that help us analyze and understand how you use this website. These cookies will be stored in your browser only with your consent. You also have the option to opt-out of these cookies. But opting out of some of these cookies may have an effect on your browsing experience.
Necessary Always Enabled
Necessary cookies are absolutely essential for the website to function properly. This category only includes cookies that ensures basic functionalities and security features of the website. These cookies do not store any personal information.
Non-necessary
Any cookies that may not be particularly necessary for the website to function and is used specifically to collect user personal data via analytics, ads, other embedded contents are termed as non-necessary cookies. It is mandatory to procure user consent prior to running these cookies on your website.
SAVE & ACCEPT